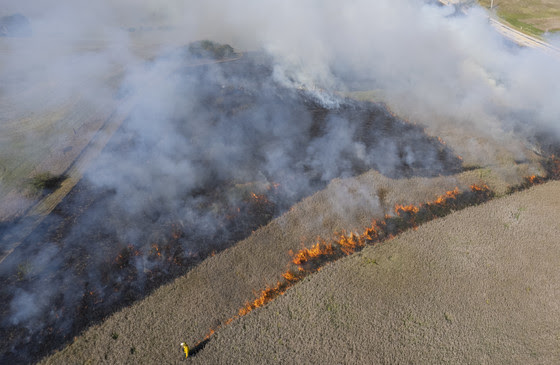 Prescribed burns are the intentional application of fire to a pre-planned area, under specific environmental conditions, to help conserve Wisconsin native grassland, wetland and savanna plant communities. Fire is a natural and necessary component of ecosystems such as native prairies, oak openings and pine and oak barrens. Periodic fire is required for regeneration and growth of fire-adapted species within these systems.

Historically, prescribed burns have occurred in the spring at Spread Eagle Barrens and other State Natural Areas. As part of the DNR’s efforts to increase prescribed burns in the area, on Aug. 17, 2021, a prescribed burn was conducted to help maintain the state and globally imperiled bracken grasslands and pine barrens on-site.

“Our goal was to get 50% of the acreage in the planned area to burn, and we achieved nearly 60%,” said Carly Lapin, DNR Field Ecologist. “As a result, we hope that the barrens structure will improve, and plant diversity will increase as more growing season burns are implemented.”

The DNR does not plan to switch exclusively to prescribed burning during late summer growing season at Spread Eagle Barrens or other state properties. The department will use prescribed fire when it’s the right tool for management.

Such natural communities evolved with fire and need it to perpetuate over time. Without fire, the structure and species composition of a plant community changes. As a result, invasive plants and woody species can overwhelm the site, and faster-growing species like maple can shade out slower-growing seedlings like oak.

An increasing number of studies across the upper Midwest including research conducted by DNR Research Scientist, Jed Meunier, suggests that spring may not be the most effective time to conduct prescribed burns to achieve brush control. In fact, some data show spring burning can cause up to a two-fold increase in re-sprouts on some of the woody plants targeted for control.

The DNR would like to continue conducting prescribed burns during the growing season for the following reasons:

To determine if a summer prescribed burn is the right tool for the time frame, DNR field ecologists, forestry and wildlife management staff will identify a site’s known plant and animal species, especially rare species, to understand how a summer burn might impact them based on established avoidance dates or state/national guidelines. They will also assess potential issues related to smoke production from the fire during that time of year.