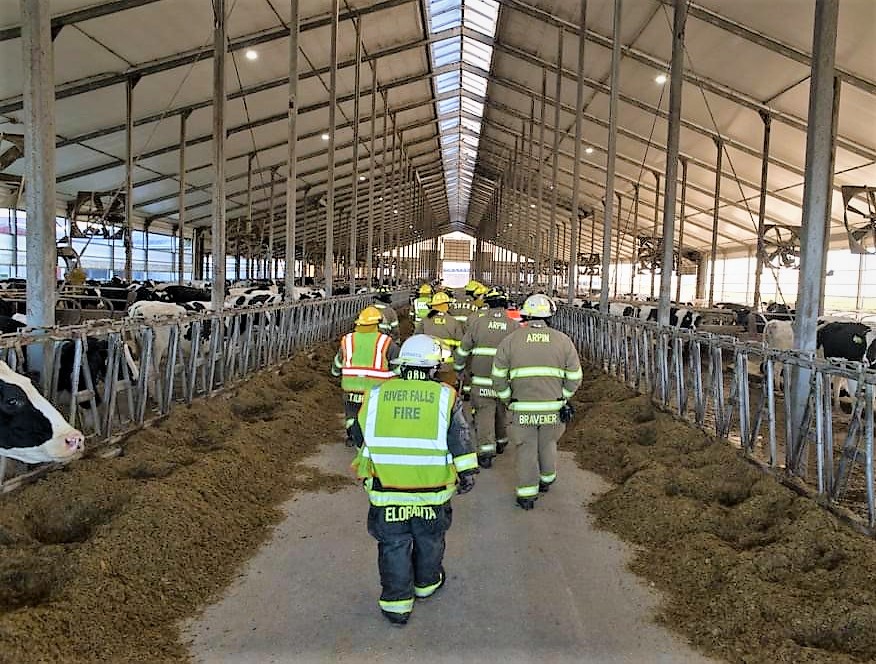 More than 70 participants from 29 departments across Wisconsin answered the call and attended the Agricultural Rescue Training Scene Management program last month at Heiman Holsteins and Heeg Farms, Inc., just outside of Marshfield.

“Rescue operations on farms tend to be low frequency/high risk, meaning that they may not happen as often as car wrecks but, when they do happen, they’re often very severe because of the nature of the occupational environment on farms,” says Casper Bendixsen, director of the National Farm Medicine Center. “It’s something that you have to train for because you don’t have a lot of practice with it in daily rescues.”

Pittsville Fire Chief Jerry Minor, lead organizer, participated in the original Marshfield-area trainings, which ran annually for about 20 years but not since the early 2000s. Minor saw a clear need to revive the trainings, as many of the original students are now retiring from the mostly-volunteer fire services of Wisconsin, and fewer new firefighters bring farm backgrounds.

The training program’s revival was made possible thanks to $53,000 pledged during the Fund-a-Need portion of the September 2019 Auction of Champions held at RiverEdge Golf Course in Marshfield. In addition, numerous local businesses and individuals provided equipment and/or support at very little or no cost. Central Wood Fire and Rescue Services Association member departments provided instructional staff, tools and equipment.

Fire departments that sent three or more personnel to the training received a free, four-gas monitor courtesy of the Mike Biadasz Farm Safety and Education Memorial Fund. The fund honors the memory of Mike Biadasz, 29, of Amherst, who died in August 2016 when he was overcome by hydrogen sulfide gas on his family’s beef cattle farm.

The following departments will be getting monitors:

Organizers plan to offer the training annually for the next four years, says Kyle Koshalek, research coordinator with the National Farm Medicine Center. Future trainings will be fine-tuned based on feedback from the first training.