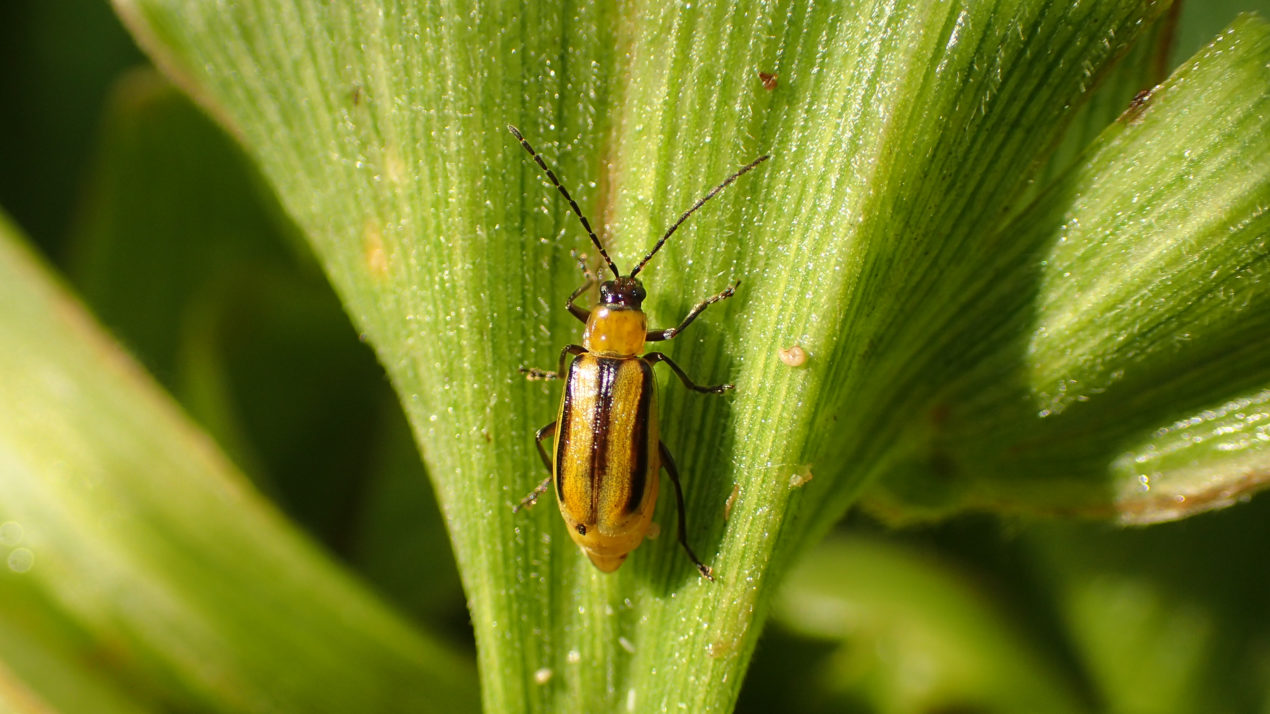 The following article is presented to you by Pioneer. It was written by Will Wynn, C.C.A – Pioneer Field Agronomist.

Corn rootworm. A pest which causes over a billion dollars’ worth of damage annually across the United States and has crept up in numbers in southern Wisconsin as of late. More specifically, Western Corn Rootworm, which is typically the most damaging of the two species in Wisconsin. Corn rootworm populations have been on the rise the past three years, especially in more of the concentrated long-term corn-on-corn growing areas across the state. Unfortunately, they can be stealthy early in the growing season. If you are not scouting for this pest by digging up roots and seeing what’s going on below ground from June to July, you could be in for an unpleasant surprise. Often a high wind event can reveal the extent of corn rootworm damage when effected plants lodge or fall down when the root system is trimmed back. The process of beetle trapping in July and August is one of the most valuable scouting techniques that can give you insight into how high your local populations may or may not be. As female beetles mature at this time and lay eggs that will hatch the following year, beetle trapping is the best way to quantify the possible risk to corn if you chose to grow it in that field again.

Crop rotation has been the most proven method of resetting your local populations and limiting your risk as a producer. And if you chose to rotate to soybeans, you could also take advantage of some inherent agronomic benefits. Sometimes producers are limited to rotating to a non-corn crop because of livestock feed needs, multi-year alfalfa stand commitments, and livestock manure logistics, just to name a few. When rotation options are limited, we must start the process of developing multi-faceted approaches to managing corn rootworm populations beyond the use of below ground Bt traits to control these underground pests. These mitigation practices can be put into place as early as the year before any seed corn is planted in a corn-on-corn scenario, or even up to planting into this type of situation.

Bottom line, there is still time to make management decisions in 2021 to minimize the risk of corn rootworm causing issues on your farm and set your operation up for success in 2022. Failure to put together a plan that involves multiple control options will result in reduced corn yields and profitability on your farm. With the current positive state of the corn and soybean market as compared to early this fall, we need to make hay while the sun shines and capitalize by maximizing our yield and revenue potential!

For more information on how to control corn rootworm in your corn field, please join us for Pioneer Agronomy Hour, a virtual educational agronomy event hosted by Pam Janhke on March 16th with the Mid-West Farm Report where we will discuss corn rootworm further. To register for the event click here.