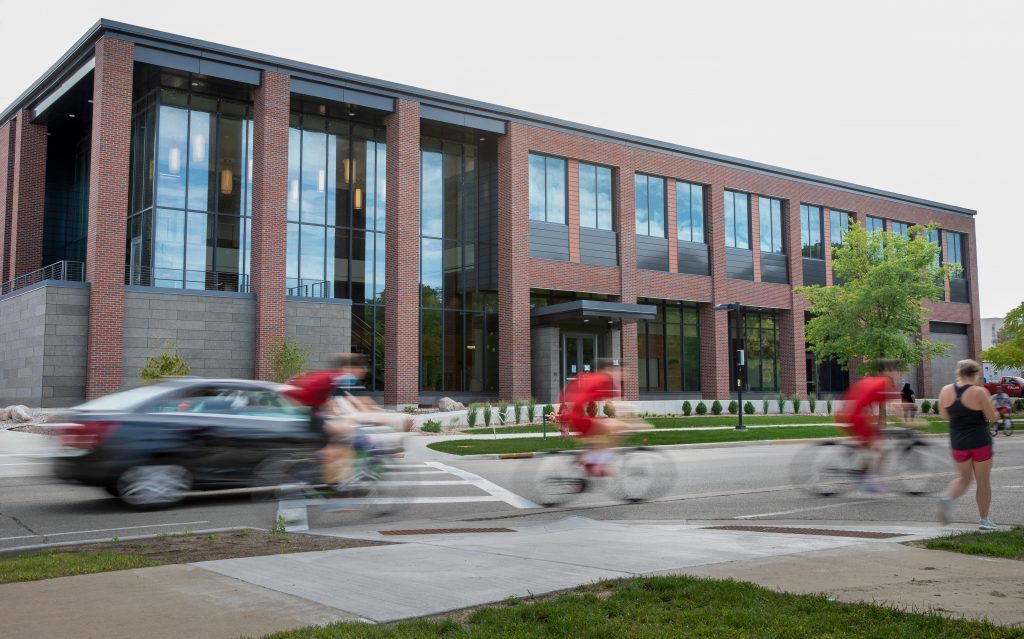 Members of the UW–Madison community are invited to join CALS in celebrating the completion of the new Meat Science and Animal Biologics Discovery (MSABD) building this Friday, Nov. 6. The virtual celebration will take place at msabd.cals.wisc.edu and on social media using the hashtag #MeatOurNewBuilding.

The asynchronous program features pre-recorded video messages by CALS, UW and state leaders that will be posted to the event website at 12:00 p.m. on Friday. Visitors to the site can also peruse photos of the facility, profiles of program faculty and staff, messages from alumni and other friends, and a special playlist of songs.

The MSABD building is the new home of the MSABD program, which is part of the Department of Animal and Dairy Sciences. The program involves research, teaching and outreach in the areas of meat science, food safety, and animal biologics — value-added molecules from animal tissues that function as medicines or therapeutics.

With a total square footage of approximately 67,540 square feet, the new building provides state-of-the-art teaching, research and outreach capabilities. It houses a USDA-inspected meat and poultry processing facility, as well as a separate Biosafety Level 2 processing and laboratory facility for food safety research. Together, these two processing plants are at the core of the research, teaching and outreach that will be offered to students and industry clientele. The building also features modern offices and conference rooms and houses Bucky’s Varsity Meats retail store (formerly Bucky’s Butchery).

It replaces the Meat Science and Muscle Biology Laboratory, built in 1931 with additions completed in 1959 and 1971. The path to the new building started in June 2009 when industry leaders and alumni on the Meat Science Advisory Board met to establish a vision for the project. The project was approved by the UW Board of Regents in August 2012, and the design for the building was completed in June 2016. In October 2016, a ham salting ceremony was held to celebrate the launch of construction. Faculty moved into the building and Steven Ricke was named program director in October 2020.

A total of 256 donors — both companies and individuals primarily from the state’s meat industry — contributed funds to support the building project. The total cost of the project was $57.1M with slightly less than half coming from the state and the remainder from gifts and program revenue.

The building’s main atrium area is named in honor of the late Mark Cook, who propelled the animal biologics component of the MSABD program. Cook, a professor of animal sciences who passed away in 2017, was a respected educator, researcher and entrepreneur with more than 40 patents and three startup companies.