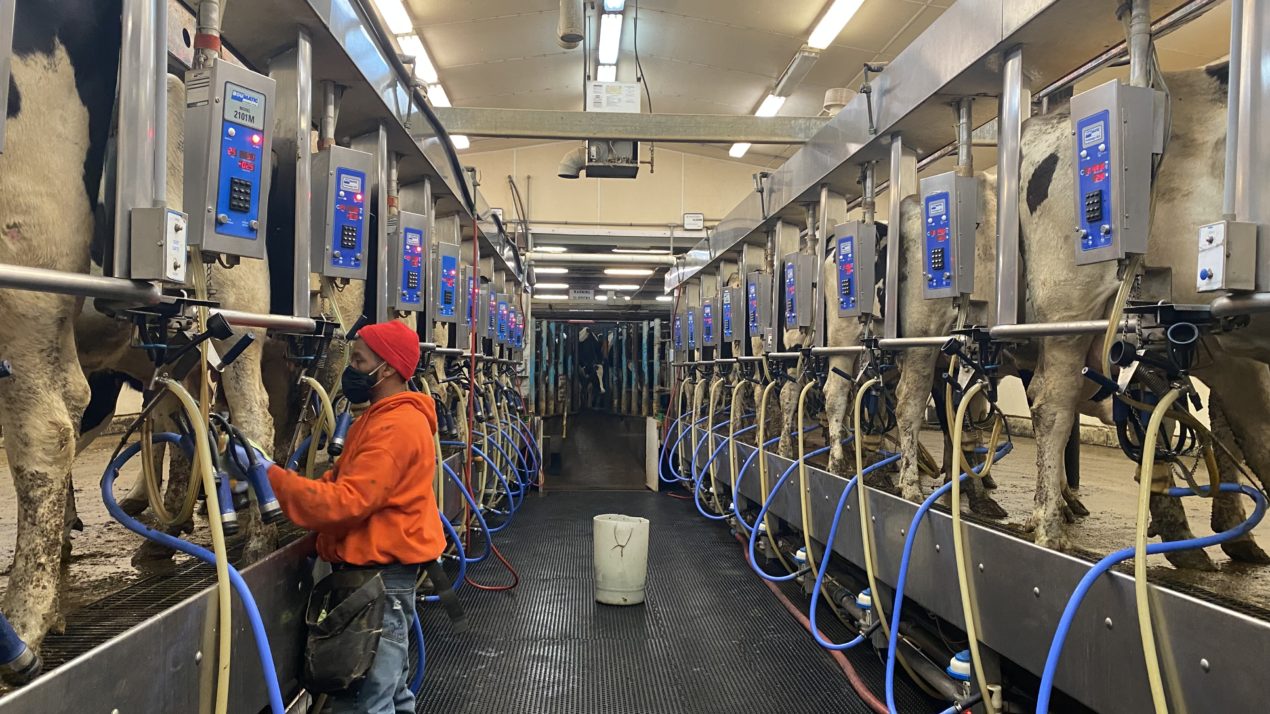 As Wisconsin faces a labor shortage, the state’s correctional system is developing a nontraditional workforce in agriculture, logistics and manufacturing.

The Bureau of Correctional Enterprises is the Department of Corrections’ manufacturing enterprise. The mission of the program is to provide jobs and training for about 400 inmates, who then develop marketable skills while providing quality products and services to BCE customers.

BCE Director Wes Ray says 88 percent of BCE workers are employed when they return home. The bureau’s transition program helps workers prepare for their return to the community and assists them six months after their release.

Agriculture is one of the four major program areas, consisting of two farms and one dairy processing facility.

The Waupun Farm is home to a Holstein dairy herd of 470 milk cows. This team employs personnel from the John Burke Correctional Center. At the time of this interview, Sherman has been milking cows at the Waupun Farm for about two months.

Sherman, a native of Racine, had dreams of playing professional basketball. He says bad decisions led to time at John Burke. He had never been to a farm before this experience, and now he is the lead milker.

“I was working in the Center and everyone was saying how there were cows out there and they were scared of them, and there was a lot of manure around,” he explains why he applied for the job. “I wanted to experience it myself.”

He says working on the farm has made him appreciate every step of the dairy food chain, including the routine, organization and equipment in a farming operation. He adds: you get used to the smell.

“I appreciate my life more now that I’ve been able to do this, because some things we take for granted in life,” he says. “But now that I’m out here and I see more life, and I was so blinded by … what I was used to – the streets and everything. Now I’m seeing farmers, I’m seeing cows. It’s a blessing – you don’t take anything for granted.”

When released, Sherman will pursue a career in ministry. He says if he can get up at 4 a.m. to milk cows and be around manure all day, he can do anything.

Workers in the BCE program are paid an hourly wage that can go toward paying court-ordered financial obligations, such as restitution to victims of their crimes or child support. A portion also goes to a worker’s release savings account. On average, a BCE worker has $3,000 more money in their savings account than a nonworker, according to Ray. This reduces the inclination to “do whatever I have to do to put food on the table,” he says.

The opportunity to earn results in a 71 percent success rate of a BCE worker not returning to a correctional facility, Ray notes.

And taxpayers are not fitting this bill. BCE is self-supporting, using just $50,000 of taxpayer money only for durable medical equipment. Everything else is funded with sales revenue. BCE is allowed to sell to gubernatorial entities and nonprofits. The dairy industry’s customers are Wisconsin Department of Corrections, Wisconsin mental health institutions and Minnesota Department of Corrections. Beyond agriculture, the BCE industries also make road signs, furniture, clothing, mattresses and more.

“But we have one primary product, and that is opportunity,” Ray says, noting BCE mirrors the private sector workforce. BCE advertises when job opportunities are available, and the inmate decides whether to apply and interview for the job. If he or she gets a job offer, they can decide whether or not to take it. The inmate can quit if they want to without a negative impact.

The 115 BCE employees are security staff, monitoring workers on the BCE teams. When it comes to residential concerns, Ray says it’s important to know that there hasn’t been a “walk away” from the facilities in at least 20 years.

The agriculture enterprise sends the milk from the farm to Waupun Dairy, where inmates at the John Burke Correctional Center can add dairy processing to their resume. Workers package milk into 5-gallon and half-pint containers, and make ice cream and sherbet in individual serving containers. The dairy also sells the cream from the production of the 1 percent milk. Customers include all correctional facilities in Wisconsin and Minnesota, and all mental health facilities in Wisconsin.

Supervisor Kory Fietz says the pandemic has been a continuous challenge for the plant – like most dairy processors in Wisconsin – as it impacts the supply chain of ingredients and packaging. Outbreaks in the correctional facility and the dairy plant have also created tight labor supply.

Processing milk into the foods and beverages many enjoy can be anyone’s dream. Christopher hails from a farming family near Kaukauna. After the farm was sold about five years ago, Christopher worked construction. Today, he’s been working for about a year at Waupun Dairy. Upon release, Christopher aims to work for major Wisconsin cheese processor Sargento.

“I’ve already made it this far here, so I might as well go somewhere else and use it,” Christopher says of his experience in dairy processing. “It’s pretty complex, yeah. There’s a lot more work into it than they think that goes into it.”