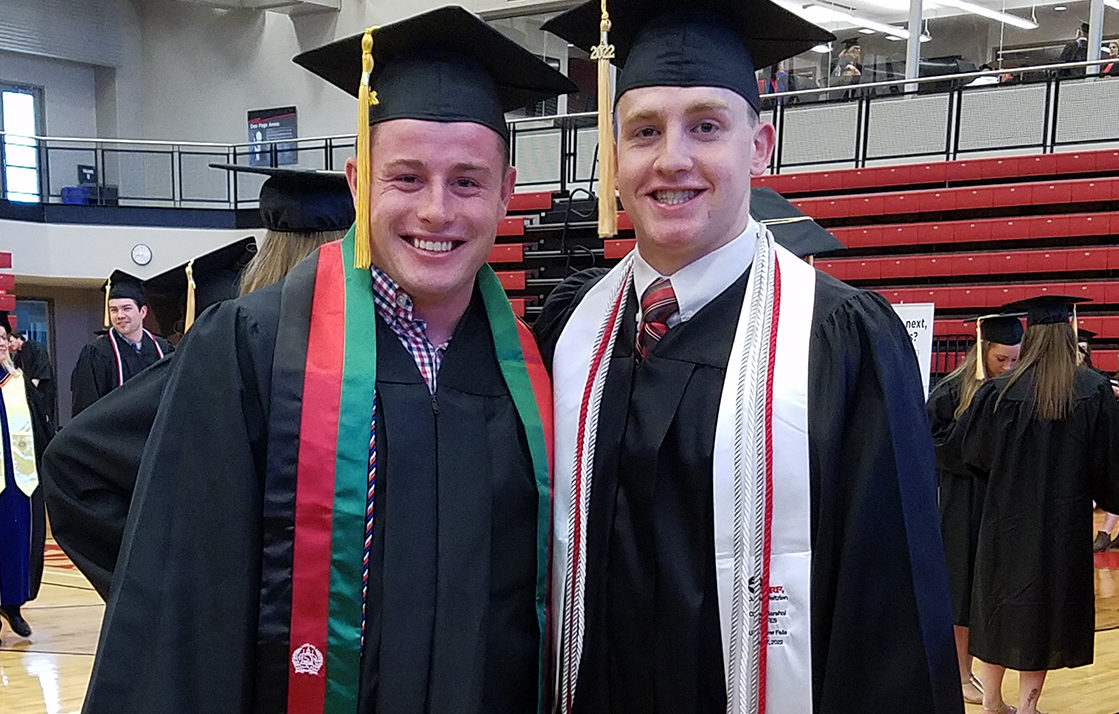 The Rochelle Junkman Seymour award for the graduating senior with the highest GPA went to Curtis Weltzien. Weltzien is an agricultural business major with a dairy science minor from Arcadia. Not only is Weltzien the leader in terms of his GPA but he is also the all-time intramural wins leader at UWRF, having just passed 500 career wins. He has a love for competition and puts in the extra effort needed to find a win. But his friends say while he is an excellent team member because of that competitiveness, he is an even better coach. Whatever the challenge, Weltzien will work day and night so he can walk away knowing he did his best.

A friend summed Weltzien up by saying, “Curtis is going to give his all, make you laugh along the way, and stick to honesty and integrity better than super glue.” As the awardee, Weltzien wore a white stole and served as the class marshal leading the CAFES graduates into the commencement ceremony on May 7.  Weltzien will be returning home to his family’s dairy operation.

David Nonemacher, of Clayton, received the Dr. Earl Hildebrand Memorial Award. This award is presented to a student who best exemplifies a combination of scholastic achievement, extracurricular involvement and leadership roles within the college. Senior students are nominated for this award by faculty in the college, with the College Awards Committee making the final selection.

Nonemacher is an agricultural business major with minors in agricultural engineering technology and soils science. The fact that Nonemacher has made the Dean’s List multiple times, been active in several CAFES student organizations and participated in a variety of intramural sports does not capture his enthusiasm and curiosity for learning and commitment to success. He was one of only 13 students chosen to be a Chancellor’s Ambassador, representing UWRF in a variety of capacities. He sought out and completed three different internships so he could experience the diversity of agriculture and expand his network. He finished 10th out of the 140+ participants in the recent NACTA soil judging competition, despite having only had one introductory soils class.

This dedication, enthusiasm and engagement really stand out once you know Nonemacher is also a Sergeant in the Army National Guard. He is responsible for a four-member team which was deployed twice during his time at UWRF, including a full year in Afghanistan.

His faculty nominator said it best, “He pushes everyone around him to do better by his own level of commitment and drive. He’s a motivator, he’s hilarious, and an all-around great person. Dave is well-liked and held in high regard by faculty and peers alike.”

When asked for his thoughts on receiving the Hildebrand Award, Nonemacher said, “I feel that I have been privileged because of the professors we have here at UWRF, I wouldn’t be where I am without them because of their dedication, enthusiasm, and expertise in their fields.”

Nonemacher will be conducting agronomy research with Agri-Tech whose parent company is Bayer Crop Science. He said the position is a great fit for him. His internship in research and product development was his favorite, as he loves to investigate and problem solve. Nonemacher will be based at his farm but traveling throughout the Midwest.

The Senior Recognition event is hosted each year by the CAFES Alumni Association. Derek Husmoen, ’08, president of the Association, served as the emcee for the 2022 event. The program traditionally features speakers from industry, the graduating class, and the faculty. This year’s speakers were Marty Hallock ‘89, owner Mar-Bec Dairy; Zach Maier, environmental engineering major; and Kerry Keen, geology and environmental science professor.