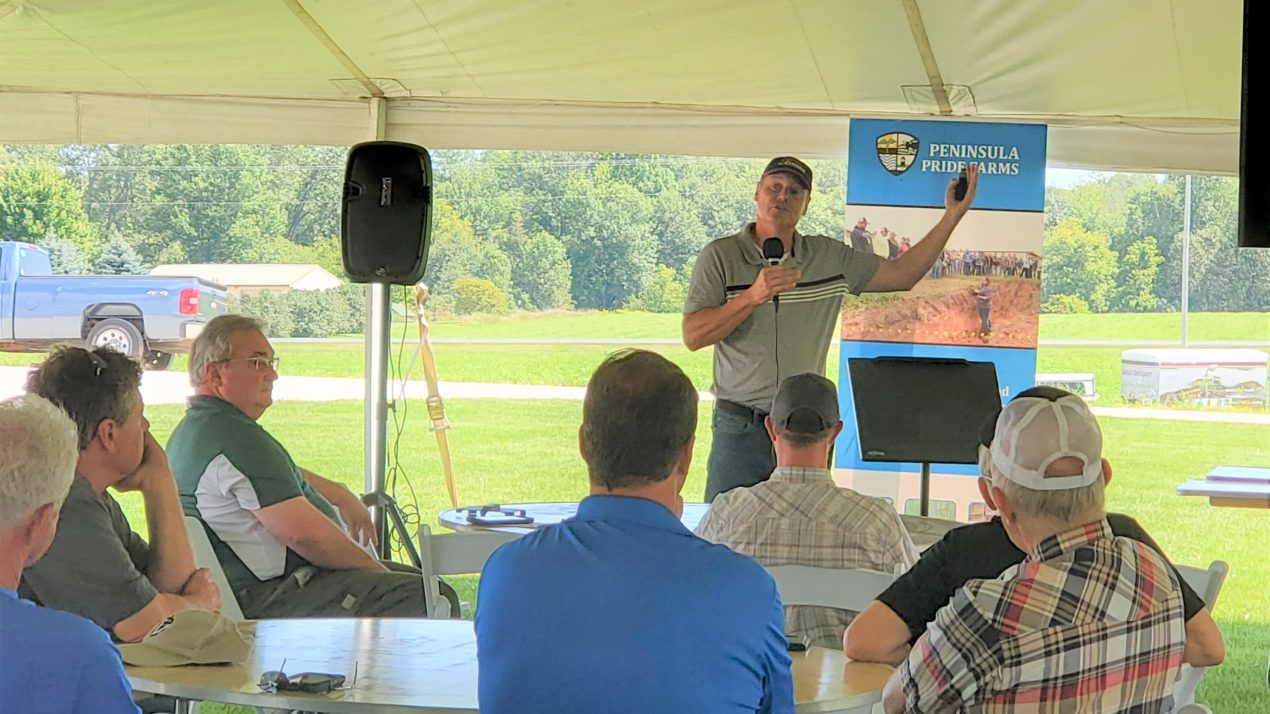 There was a time when Rick Clark didn’t look too far down the road on his farm. His focus was on the year’s bottom line. That was then. Now, Clark, a cash cropper in Indiana, sees longer distance. “I no longer look at a single year of profitability but over years as a system. It’s different ways we’ve got to look at that stuff,” he said. “It’s not about yield, it’s about profitability.”

Clark brought that lesson and others to a field day on Aug. 17 at Deer Run Dairy hosted by Peninsula Pride Farms and the Door-Kewaunee Demonstration Farm Network. Clark has been celebrated by national groups for an innovative, system-level approach to soil health that he calls “Farming Green.” The approach has resulted in increased profitability and better environmental effects.

Clark’s regenerative system is rooted in soil health and involves implementing a variety of practices, such as diverse crop rotations, cover crops and no-till. Clark said the combination of those techniques not only builds soil health but has allowed him to ditch chemical pesticides and fertilizer.

Cover crops, for example, “leave enough nutrients to feed your crops,” he said. “It is imperative to view cover crops as important as the cash crop. The success of next year’s cash crop depends on the success of this year’s cover crop.”

Clark said although he farms in an area with a different climate, other farmers can take ideas from his experience. “The principles of soil health still hold true no matter where we are,” he said.

Clark challenged the attendees to think differently and be open to change. “Change is good, change is necessary, change is the answer,” he said.

Barry Bubolz, who works locally for the U.S. Department of Agriculture, expanded on the importance of soil health during a demonstration using a rainfall simulator. He showed how much water was running off versus infiltrating the soil samples. The test included a number of different no-till management samples. He said he sees potential for improvement in Kewaunee County, where porous bedrock increases the risk to water quality.

“The organic matter averages at 2 to 3 percent in the fields right now whereas the fence lines average around 8 percent. This means that we can improve,” said Bubolz, area coordinator for the Great Lakes Restoration Initiative of USDA’s Natural Resources Conservation Service.

The field day participants took a deeper dive into the soil health effects when Jamie Patton, senior outreach specialist at the University of Wisconsin-Extension, crawled into a pit to demonstrate the soil structure. On one side was a lane that had been compacted for years; on the other a field with no compaction for an equal time. On the field side, the topsoil easily crumbled, as the root structure and earthworms broke it up. The opposite was true below the lane.

Clark encouraged the participants to continue what they’ve started as a group. Field days and other opportunities to share experiences are important, he said.

“Do not underestimate the power of networking — like we’re doing today,” he said.