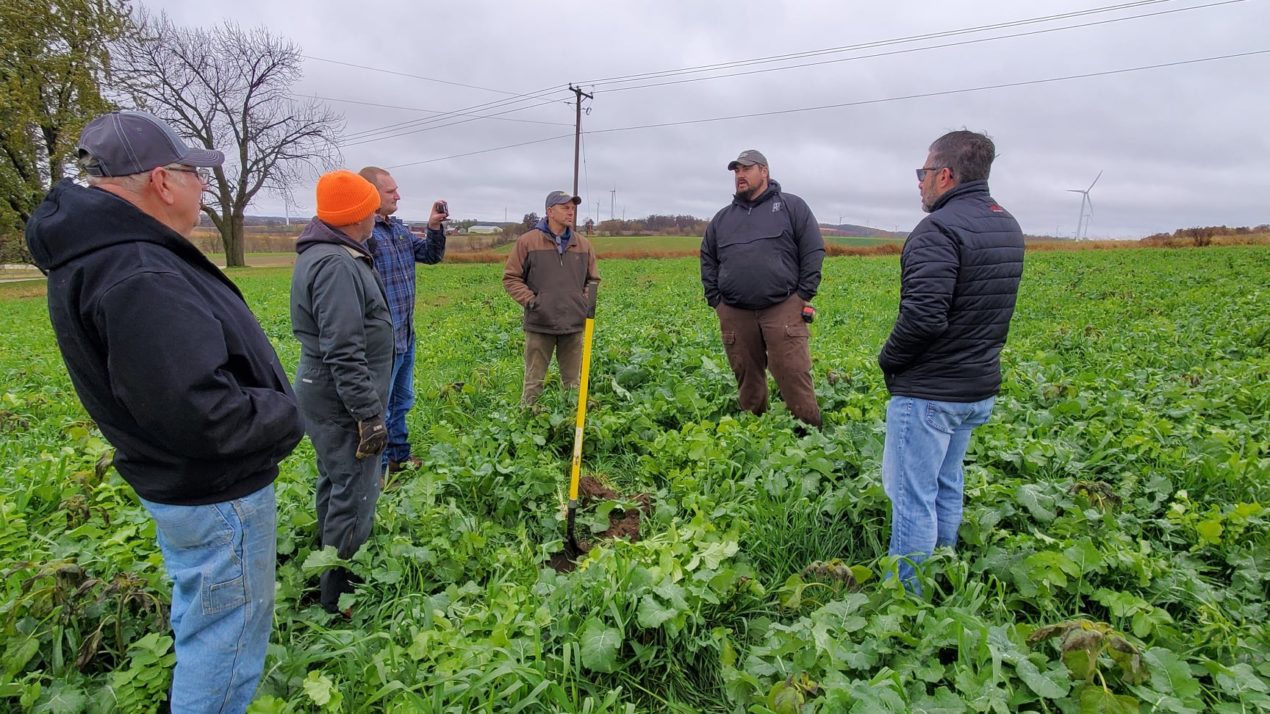 It took less than 24 hours for 4 inches of rain to fall on Clint Hodorff’s wheat field, and the timing could have been bad. The monsoon came just prior to a field day he was to host as a member of Sheboygan River Progressive Farmers (SRPF).

Hodorff’s intent was to show area farmers the general positive impact of his multi-species of cover crops. Instead, the owner of Second Look Holsteins ended up with the opportunity for a lesson in real time.

The cover crops had kept runoff to a minimum. The soil Hodorff dug into as a demonstration showed the value of the root structure and worm activity.

“Even after 4 inches of rain, I thought the soil would be tacky. The soil just fell apart in my hands because of what the cover crops and worms were doing,” he said after the Sept. 23 field day.

Hodorff started his journey into cover crops by contacting several people he knew who were planting cover crops, did his own research and came up with an eight-seed mix of barley, crimson clover, rapeseed, cereal rye, sunflower, tillage radish, wheat and winter pea.

“I wanted a cover crop mix that would help with water infiltration, soil structure and also keeping the nutrients in the upper level of the soil,” he said. “One of the things we like about using cover crops is planting into green in the spring, helping with erosion and, being a dairy farm, helping keep the nutrients from manure application in the soil where it needs to be and not running off.”

Cover crops are becoming widely used for their ability to hold the soil in place, creating healthy biomass below the surface and keeping nutrients in place for the crops. Numerous members of SRPF, a farmer-led watershed conservation group, are adopting cover crops to improve soil health, increase farming efficiency, sustain profitability and lessen the impact on the environment.

Two points were discussed in detail during the field day – Hodorff’s decision to use rapeseed and to not chop the cover crop for forage. Rapeseed is an alternative to radishes because they offer similar benefits and are cheaper.

Many farmers are seeing the benefits of cover crops, but the conservation practice still has some trial-and-error results.

“It was also interesting to hear how Clint believes in leaving the organic matter in the field and extending the growth as long as possible,” Laughlin said. “I’d like to say that cover crops are the ‘one thing that will change the many.’ It’s not so much that they are the silver bullet solution, but that in adopting cover crops and seeing soil health improvements, farmers tend to become open to thinking about their operation in new ways.”