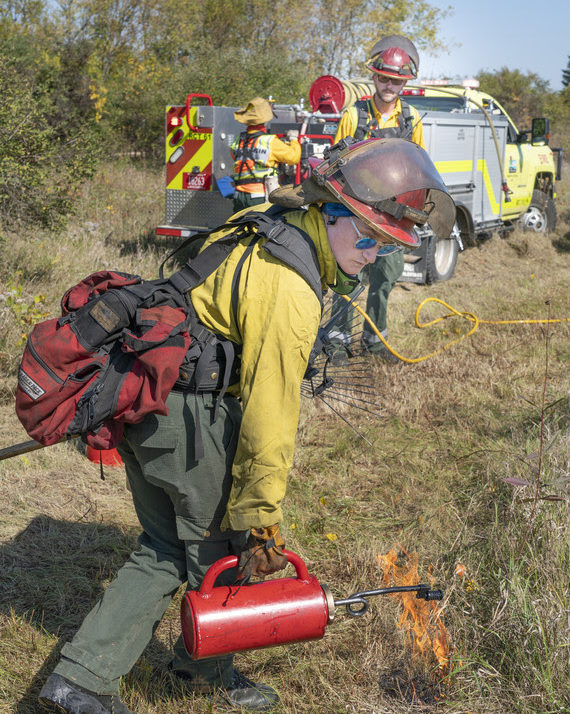 Now, they’re applying it to more landscapes during more seasons to help control invasive species and bring the largest benefits to rare landscapes and wildlife. The DNR says more prescribed burns conducted during the late growing season and fall may be more effective in controlling brush than spring burns.

See the DNR’s Prescribed Fire Dashboard to see what prescribed burns have and will be conducted: https://dnrmaps.wi.gov/WAB/Prescribed_Fire/

The Henslow’s sparrow is an example of how the late growing season prescribed burns have impacted native wildlife.

Henslow’s sparrow is a “Species of Greatest Conservation Need” in Wisconsin and one of the species that will benefit from a prescribed burn conducted during the late growing season in 2021 at a Dane County site.

DNR southwestern field ecologist Nate Fayram “prescribed” a late growing season burn at a southern Wisconsin conservation area to give rare grassland songbirds more to sing about and increase rare butterflies that flutter by. Fayram explains that conducting a prescribed burn at a conservation site for birds knocks back the monoculture brome grass and invasive brush while boosting native wildflowers and grasses growing in patches of remnant prairie on the 360-acre site.

“If the prairies expand, we’ll have grassland birds plus native plants and insects,” he says.

Grassland birds are in steep decline in Wisconsin and elsewhere as prairies disappear. Wisconsin’s prairies, estimated over 2 million acres in the 1800s, have dwindled to less than 10,000 acres. Prescribed burns stimulate the growth of wildflowers, which attract insects — a vital food source for young grassland birds — and improve nesting cover for the birds.