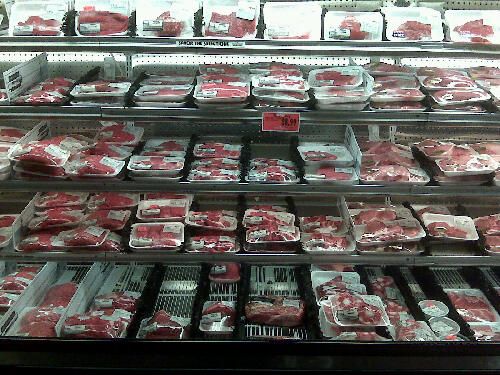 There’s cautious optimism in the meat sector.  The optimism comes from the idea both hog and cattle supplies will tighten in the weeks ahead. The restaurant performance index rose 1.1 percent in December. The US economy added 49,000 jobs in January while unemployment dropped to 6.3 percent. Domestic and international meat demand has been strong. Producers have been looking for signs of good news amid rising input costs.

Cash cattle ended last week $2.00 to $3.00 higher and the higher prices have held into this week.  Prices may not be enough for cattle feeders to realize a profit, however. Estimated cattle harvest last week was 653,000 head, 2.4 percent above a year ago.  The prevalent opinion seems to be the large supply of cattle will soon be behind us.  The average carcass weight for beef breed steers was 896.5 pounds according to the latest report, and that’s two pounds below the previous week, but sill 18 pounds heavier than a year ago. The beef cutout was $233.95 on Friday, January 29 after a strong week of gains. The cutout hasn’t been this high at this time of year since the winter of 2014-2015. Export orders for US raised beef totaled 29,900 pounds according the latest export report.

It’s still hard to comprehend that now, 10 months after the first processing facility temporarily closed due to COVID-19, we are at the end of the butcher hog backlog. Butcher hog carcass weights are beginning to decrease.  We can still argue that the backlog was or wasn’t as large as the worst-case estimate, but everyone will agree it’s good to have worked through the wall of pigs we struggled with so much of last year. Harvest last week was estimated at 2.658 million head, 1.4 percent below a year ago.  Cash hogs on a carcass basis were $2.00 higher last week, but did soften late this week.  It was another good week for pork export orders, as they totaled 46,300 metric tons.

The number of beef cows in Wisconsin on January 1 was even with a year ago at 310,000 head.  The beef cow herd nationally dropped by less than 1 percent totaling 31.2 million head. The number of cattle and calves in Wisconsin feedlots were up 4 percent at 250,000 head.  While milk cows were unchanged in Wisconsin, totaling 1.26 million head, the national dairy cow herd grew 1 percent to total 9.44 million head.  Cattle numbers came in higher than early estimates, while the nation’s calf crop at 98.7 percent compared to the previous year was lower than industry expectations.