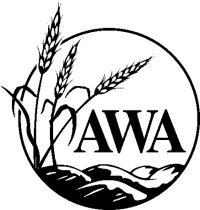 Three outstanding individuals were honored on April 10 by the Association of Women in Agriculture Benefit Corporation (AWABC) at the annual AWA Day. Jill Makovec, Dr. Sandy Curran and Emily Franke were recognized for their contributions to the organization.

Jill Makovec was recognized with the AWA Founders Award. The Founders Award is presented to an individual who has had a significant influence on students and alumni of AWA. As an alumni member Makovec served as the AWA treasurer and financial management chair. During her time in these roles the AWA house was refinanced with Home Savings Bank, the interest rate was reduced and the last check for the mortgage on the AWA house was written. She also led through the process of AWA becoming a 501c3 organization, allowing to file for property tax exemption. Makovec graduated from UW-Madison with degrees in Dairy Science and Ag Journalism. Now, she is a National Account Executive at Learfield – Brownfield Ag News & WI Radio Network and resides in Madison, Wis.

Dr. Sandy Curran was recognized as Outstanding Woman in Agriculture. The Outstanding Woman in Agriculture is recognized for her significant influence on the agricultural industry. Dr. Curran is described as a pioneer, business woman and someone who has changed how a whole industry operates. She was a 1983 graduate with a degree in meat and animal science and received her DVM in 1987 – receiving both from UW-Madison. Dr. Curran developed and commercialized reproductive technology and made it available to others through seminars and teachings to other veterinarians. She is the owner of Ultrascan Inc. and resides in Madison, Wis.

Emily Franke is this year’s student Outstanding Senior. The Outstanding Senior is awarded for her years of leadership through AWA. She is a majoring in dairy science and life sciences communication and is from Oakfield, Wis. Franke is a true example of what it means to be a professional woman in agriculture. Throughout her four years at Madison, she has served as an officer three of the years along with being an active participant on numerous committees, as well as involved in other student organizations. Franke will be joining the team at Professional Dairy Producers of Wisconsin (PDPW) as a Project Coordinator upon graduation this spring.