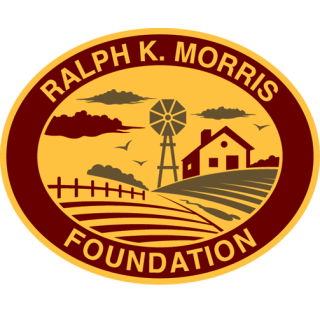 The Ralph K. Morris Foundation has named its annual flagship event the Tom Lyon Leadership Symposium, in honor of the longtime cooperative and civic leader and founding member of the foundation.

“Tom, as one of our founders, was not only the inspiration and driving force of our two mission areas – education about cooperatives and land and water conservation – but also our program delivery methods, professional development scholarships, the Leadership Symposium and educational symposia on university campuses,” said Morris Foundation Board Chair William Nelson. He commented after the Morris Foundation’s Board of Directors unanimously approved the designation.

“It’s humbling to have the Leadership Symposium named in my honor,” said Lyon. “When we established the Ralph K. Morris Foundation, the focus was to provide encouragement to people to advance cooperative business, develop their leadership skills and work for the preservation of farmland. We’ve been successful in that regard, and my hope is that the Leadership Symposium will continue for years to come and inspire others to advance the cooperative business model and the preservation of farmland.”

Lyon lives in Cambridge, Wisconsin, with his wife, Barbara. His professional career in the cooperative world included serving as chief executive officer of Cooperative Resources International (GENEX) of Shawano. His lifetime of work on behalf of cooperatives earned him induction into the National Cooperative Business Hall of Fame in 2006, when he was saluted as an innovator, visionary and pioneer devoted to building cooperatives for the future.

His lengthy list of civic involvement includes serving on the University of Wisconsin System Board of Regents, two years as its president. His commitment to land and water conservation is underscored by his service on the board of the American Farmland Trust, a national organization that works to protect and conserve farmland.

Upon retirement in 2003, he worked for several years as a consultant to Rod Nilsestuen, who served as secretary of the Wisconsin Department of Agriculture, Trade and Consumer Protection. Nilsestuen was also a longtime cooperative leader. Lyon also co-chaired The Future of Farming and Rural Life in Wisconsin, an initiative of the Wisconsin Academy of Sciences, Arts & Letters. Completed in 2007, the project was the first comprehensive study of its kind in the state.

The Ralph K. Morris Foundation is a nonprofit corporation that provides development opportunities for emerging leaders expressing interest in applying and advancing the principles of cooperation, and in promoting farmland preservation, land stewardship and sustainability. It was established by Lyon and other founders to continue the cooperative development work exemplified by the late cooperative leader Ralph K. Morris of Minnesota. The foundation has provided nearly 2,000 professional development scholarships in its 20 years of operation. In addition, it hosts educational symposia on topics related to cooperatives and land and water conservation on university campuses, including the University of Wisconsin-River Falls and University of Wisconsin-Stevens Point.  Learn more at ralphkmorrisfoundation.org