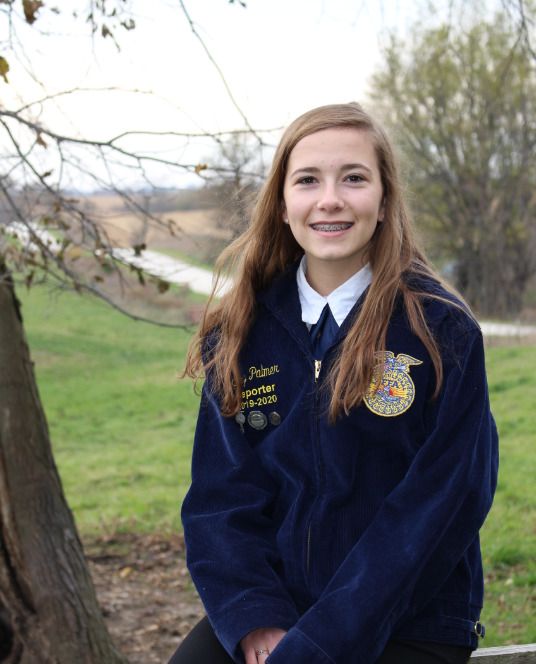 Her goal is to be a good role model for others, and in the process, Carly Palmer is blazing a path of accomplishments for young women interested in FFA.

Palmer is the president of the Little Switzerland FFA Chapter in Waukon, but she did not come from a traditional family farm.

“We live out in the country, and I grew up around my grandpa’s farm, but we own a welding shop outside of Waukon that works on farming machinery,” she said. “I grew up learning how to fix farm equipment.”

She joined FFA four years ago decided to increase her involvement as a junior. Palmer accepted an officer position as the chapter reporter, and from there she joined every group and committee possible.

“I got a little overly involved,” she laughed. “I tried to do any community services that I could. Then I decided to apply for a proficiency award, and later, I became the state champion of the proficiency of agriculture fabrication and design. I did a Star as well, and I became one of the six Star finalists in placement. I also got my Iowa FFA Degree my junior year as well.”

Palmer was one of the only females applying for a proficiency award for fabrication and design.

“That’s a big step for me to be the state champion,” she said. “It is nice to have that female empowerment in that position. I think we definitely need more females in areas like that.”

Although National FFA Week will happen a little differently for The Waukon Little Switzerland FFA Chapter, Palmer said she will continue sharing her story with hopes of inspiring others.

“Agriculture is related to everything in your life,” she said. “It is the food you eat. It is the products you put in your hair. Anything that you do is basically related to agriculture. You don’t have to come from that farm background to be really involved.”

Palmer planned to stay involved even after graduation and keep her Supervised Agriculture Experience (SAE) going so she can receive her National FFA Degree.

The next step in her path of life is to attend Northeast Iowa Community College and double major in agriculture business and agriculture fabrication. She is off to a good start with nearly a quarter of both degrees completed because of high school concurrent classes.

“My hopeful goal is that I will go back to Palmer Repair, our fabrication business, and run the finances of it since I’ve been welding since I was 8-years-old. I’m going to try to do a lot of the bookwork, and if that can’t keep me busy, maybe I’ll open up a restaurant later in my life.”