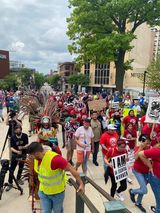 In the face of a statewide labor shortage, immigrant essential workers are voicing their role in Wisconsin’s economy, including agriculture.

This week, immigrant workers and their supporters closed a nine-day, 90-mile march from Milwaukee at the state Capitol. The objective? To pressure President Biden and Congressional Dems to include citizenship for all immigrant essential workers and their families in the infrastructure bill they are currently negotiating.

Tina Hinchley, a Cambridge dairy farmer and Wisconsin Farmers Union representative, participated in 18 miles of the march. At a podium on Capitol Square, she explained that immigrant hands touch the milk that accounts for 11 percent of the state’s GDP. She argues that immigrant workers deserve driver’s licenses, which would benefit farm employers as well.

Neumann-Ortiz also expressed her emotion upon reaching the Capitol — the finish line of the march. She says it was a beautiful experience.