Harvest Ahead Of Normal 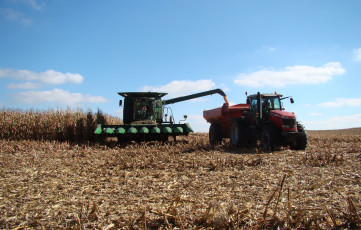 Harvest continues ahead of normal for both corn and soybeans as temperatures remain above normal in the Badger State, according to the latest crop progress report from the USDA’s National Agricultural Statistics Service.

Rain hasn’t been much of a stopping factor. In the past week, the southern two tiers of counties received significant rain, while the rest of the state got less than an inch.

Winter wheat was 97 percent planted. Eighty-five percent of winter wheat has emerged, six days ahead of last year and over two weeks ahead of normal.

Fall tillage was 52 percent complete, three days ahead of last year and 12 days ahead of the five-year average. And most areas reported manure application.