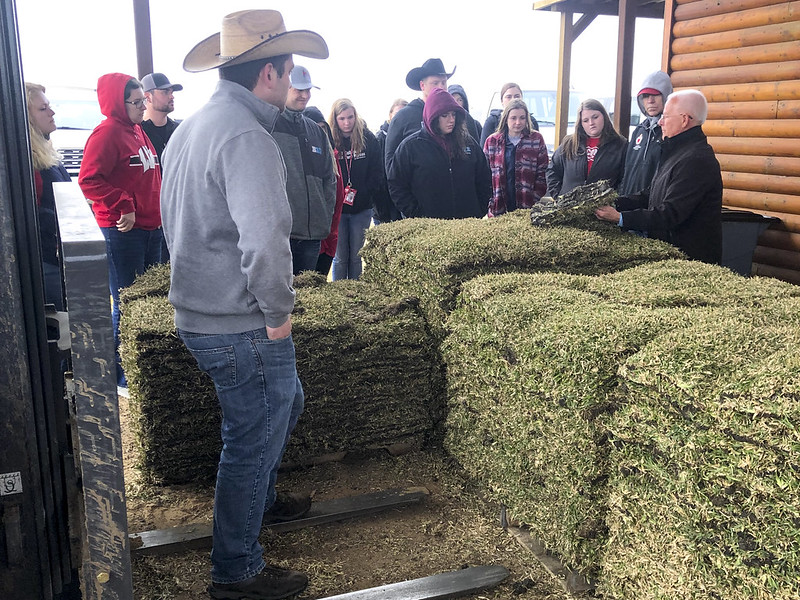 After two years of being told to socially distance as much as possible, members of the UW–Madison Collegiate Farm Bureau say the ability to socially interact was one of the highlights of a recent spring trip to Texas. They also got to learn about agriculture in a different part of the U.S.

Nineteen students spent time in Dallas/Fort Worth, Waco, Houston and other smaller locales during a five-day trip in mid-March organized by Collegiate Farm Bureau members. CFB members generally participate in a local field trip in the fall and a trip out of the Midwest in the spring to give the group a chance to learn about a different type of agriculture, and the Texas trip was just what the doctor ordered for the students who made the trip.

Billy Zeimet, chapter president and a member of the trip organizing committee, says the trip offered chapter members an opportunity to learn about a “diverse array” of agriculture in a short amount of time.

“We don’t want to just learn about dairy, corn and beans while we are at the UW,” says Zeimet, a dairy science major who grew up in Cottage Grove and has worked on local dairy farms. “The spring trips provide us with a chance to get a feel for another region’s agriculture. It was really awesome.”

The UW–Madison chapter of the Collegiate Farm Bureau, established in 2010, seeks to promote agriculture on campus and connect students through advocacy, education, professional development and interaction with industry leaders. About half of the organization’s current 40 members are dairy science majors, with several other majors represented, including agronomy, animal sciences, life sciences communication, biological systems engineering and agricultural and applied economics.

Sophy Henisz, a junior with a double major in dairy science and Spanish, grew up in Philadelphia but found her way to UW–Madison after working on a small Pennsylvania dairy farm during high school.

“I wanted to spread my wings a bit by coming to Madison,” says Henisz, who signed up for the Texas trip to “get outside of [her] comfort zone” and learn more about agriculture.

“I learned about a lot of things that were distant to me,” she says. “It was a really good mix of ag commodities I didn’t know a lot about, and it provided a lot of hands-on learning opportunities.”

The group visited the home office of the Texas Farm Bureau in Waco; listened to a lecture on the economic impact of the cotton industry in Texas; got a tour of the sprawling Texas A&M campus; visited the Houston Livestock Show; and took in the George W. Bush Presidential Library in Dallas. Members also visited a sod farm, toured a beef feedlot and even made a stop at a boot shop to get outfitted with some Texas-style footwear.

The opportunity to socialize with chapter members was as valuable as the learning opportunities along the way, Henisz says.

“It’s been a really long time because of Covid that I’ve had an opportunity to hang out with people outside of my dairy science cohort,” she says. “It was a really great opportunity to reestablish relationships.”

Sydni Mell, a freshman majoring in dairy science, says she appreciated the opportunity to travel with upperclassmen “and learn the different sides of agriculture.”

“I didn’t even know what a sod farm was until we spent time on one down there,” she says. “I had no idea they used a combine to harvest cotton. I learned a lot about how they survive the heat in Texas and a came to appreciate how green Wisconsin is.”

Mell, who grew up on a 200-cow dairy farm near DeForest, says she enrolled at UW–Madison for the variety of experiences she will enjoy during her four-year college career.

“The academics can be hard but the extras like this study tour really make the overall experience a fun one,” she says. “I’ve always wanted to be a Badger and I’m glad I’m here.”

Mell says she joined the Badger Dairy Club and followed a group of BDC members into the Collegiate Farm Bureau.

“I knew if I wanted to go into the dairy industry the organizations would help me get to know more people,” she says. Mell hopes to someday take over the family farm.

Ted Halbach, a dairy management faculty instructor in UW–Madison’s Department of Animal and Dairy Sciences, is the academic advisor for the Collegiate Farm Bureau. He said he heard several CFB chapter members say that various components of the trip sessions exceeded their expectations.

“A lot of these students hadn’t traveled outside of Wisconsin, so the trip helped improve their awareness both culturally and agriculturally,” he says.