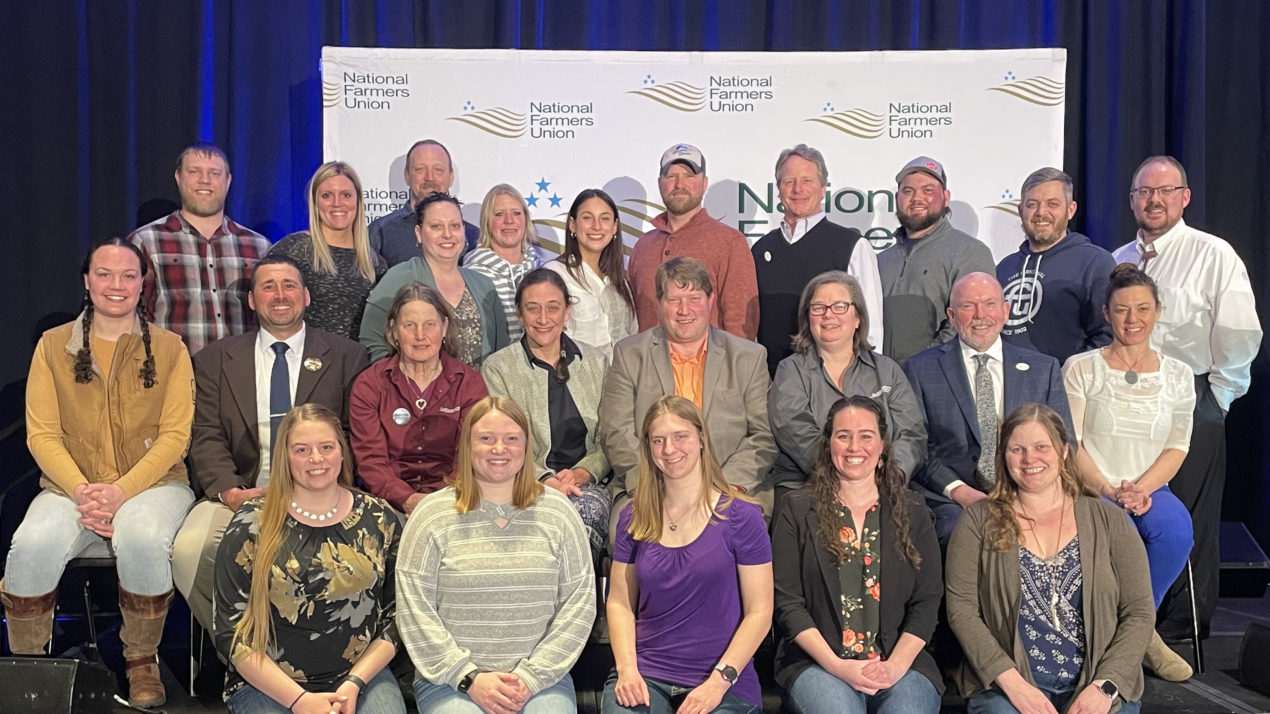 “Our annual convention is an exciting opportunity for Farmers Union members to gather together, in person, to work towards our shared goal of economic prosperity and social justice. With all the challenges we face today, our grassroots organization is needed more than ever to confront these obstacles,” said NFU President Rob Larew.

Larew, who grew up on a West Virginia dairy farm and has served as NFU President since 2019, was re-elected without opposition. In a rousing State of the Farmers Union address, he committed to continue to push for fairness for farmers and called on members to engage in NFU’s work.

“Time and time again over Farmers Union history, when faced with challenges, we rise to the task and we get it done,” he said. “Farmers Union is strong and we are steadfastly in the fight.”

“We need to make production agriculture for family farmers vibrant once again,” said Sen. Tester, who was presented with the Fairness for Farmers Champion Award for his work on fair markets, meat processing infrastructure, and other rural issues.

Both Vilsack and Ducheneaux touched on how the extractive economy present in rural America is not serving family farmers or their communities.

“It sure seems to me as though we all work so hard to try and fill a gap,” Ducheneaux said. “What if we addressed why there is a gap? Why don’t we start treating agriculture like an infrastructure investment?”

“What we’ve had in rural America for far too long is an extraction economy, where essentially things are grown on the land and taken to be processed someplace else,” Sec. Vilsack said. “We need to move away from the extraction economy that benefits only a small percentage of the people to a circular economy that takes full advantage of the natural resources we have and creates wealth in rural America.”

Breakout sessions were held on NFU’s history of fighting for fair markets, engaging the next generation of agriculture leaders, addressing confusion on carbon markets, and the potential of biofuels. Those conversations set the stage for the organization’s annual line-by-line policy review and approval of special orders of business, including one on dairy policy reform that was championed by WFU.

“We all are disappointed that Patty Edelburg was not successful in her candidacy for another term as vice president; she has done a tremendous job in her service in that role,” Adamski said. “But all-in-all, being here has been inspiring, as we’ve had the chance to learn more about Farmers Union history and the cyclical nature of the challenges many of us are facing today on our farms.”

During the convention, Ryan and Becky Brathal of Woodville, Allison Hellenbrand of Madison, and Anna Hinchley-Skedahl and Kevin Skedahl of Cambridge took part in the Farmers Union Enterprises Leadership Program.

WFU President Adamski noted the significance of the passage of the Dairy Policy Reform language.

“The level of agreement and solidarity we’re seeing among dairy farmers, not just in Farmers Union but in other farm organizations, is critical for the needed change in U.S. dairy, and I think it’s directly attributable to the important Dairy Together work that WFU has been leading in the past several years,” Adamski said. “We look forward to continuing to move that effort forward within NFU and collaboratively, especially as we move toward the 2023 Farm Bill. At the rate we’re losing dairy farms across the nation, dairy policy reform cannot come soon enough.”

The language on dairy policy reform calls on Congress to establish a mandatory program for managed growth based on market demand and price stability in the 2023 Farm Bill. Specifically, the special order states such a program should increase farmer profitability by elevating milk prices, preventing overproduction, and reducing milk price volatility. It also must allow for beginning farmer entry, reduce government expenditures, respond to global market conditions, be national and mandatory, allow for planned growth, be designed in a way that any production base does not acquire value, and have meaningful farmer input in development, implementation, and governance.

Full text of the adopted policy manual will be available soon at www.nfu.org.