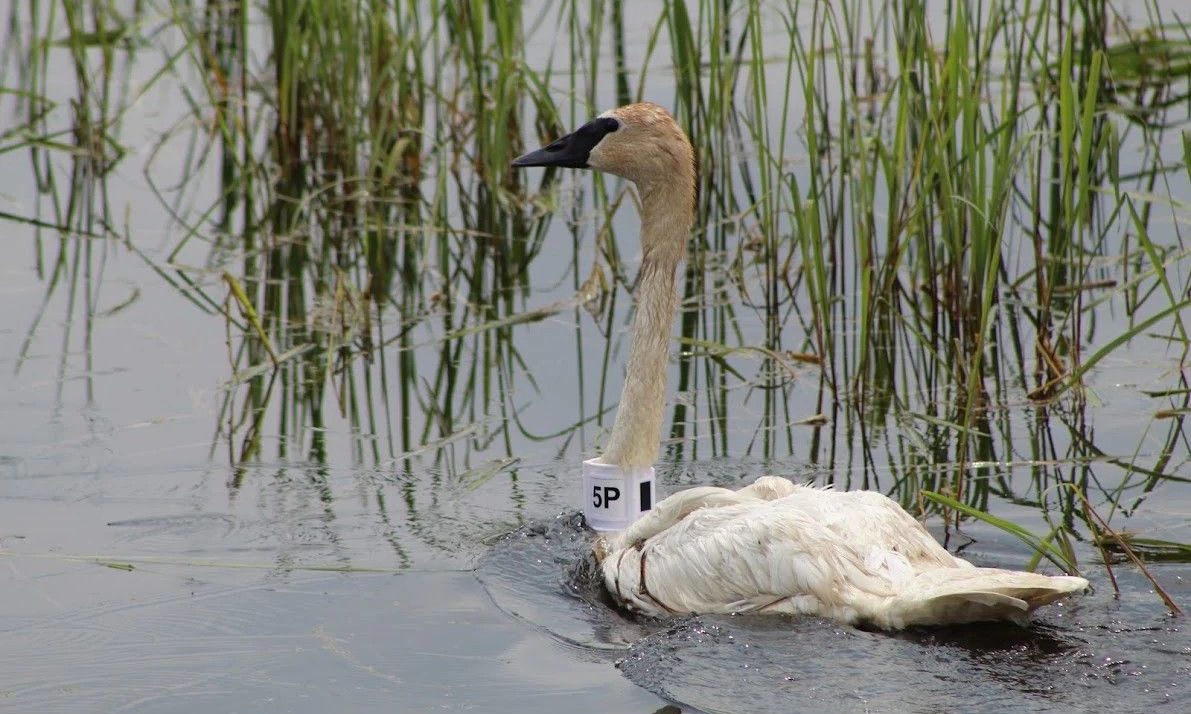 The DNR is collaborating with the Great Lakes Indian Fish and Wildlife Commission, other western Great Lakes states and the Canadian province of Manitoba to place nearly 100 GPS collars on trumpeter swans in the Interior Population located in the Central, Mississippi and Atlantic Flyways for research.

The collaborative project seeks to collect as much information as possible to:

Nine Wisconsin trumpeter swans are wearing collars as part of the Great Lakes study led by Minnesota and coordinated by David Wolfson, a Ph.D. student at the University of Minnesota. Of those, five were captured and outfitted with collars in 2020. The other four were captured and outfitted with collars during the summer of 2021.

Trumpeter swans are North America’s largest waterfowl species, making capturing and tagging a challenge. The species grows up to 5 feet long, weighing 20 to 30 pounds with a wingspan over 7 feet.

The DNR, its partners and volunteers work to capture young swans, called cygnets, before they are old enough to fly. Adult swans are captured within the two- to three-week window in late summer when they are molting and cannot fly until their new feathers develop.

“I want to sincerely thank all of the staff and volunteers that helped get the trumpeter swans tagged with GPS collars,” said Taylor Finger, DNR Wildlife Biologist. “The research and information from this project will directly impact how we manage trumpeter swans for years to come.”

Less than a generation ago, trumpeter swans in the Interior Population, including birds in Wisconsin, Minnesota, Michigan, Iowa and Ohio and the Canadian province of Ontario, were endangered due to wetland habitat loss and market hunting. Interior Population restoration efforts starting in the 1980s have helped trumpeter swan populations soar past 30,000.

Minnesota’s population is estimated at more than 17,000 and Wisconsin’s at 11,000, with Michigan, Ohio and Iowa supplying the rest.

“Now those large populations allow for, and underscore the need for, research to help reveal more about the swans’ ecology to better inform future management,” said Sumner Matteson, the DNR’s Avian Ecologist who led Wisconsin’s recovery effort with partners.

How To Help This New Research Effort

Early results suggest a lot of individual variability in migratory behavior and some bigger regional differences.

“We’re currently trying to work on quantifying the influences of weather and environmental conditions and how those relationships may vary in different parts of the Interior Population range,” said Wolfson.

People who spot a marked swan can contribute to data collection efforts by reporting what the swan was doing and where it was located. Report observation by using the Google form here.

Learn more about the project on the Interior Population Trumpeter Swan Migration Ecology and Conservation website.