Couple Honored For Lifetime Of Conservation 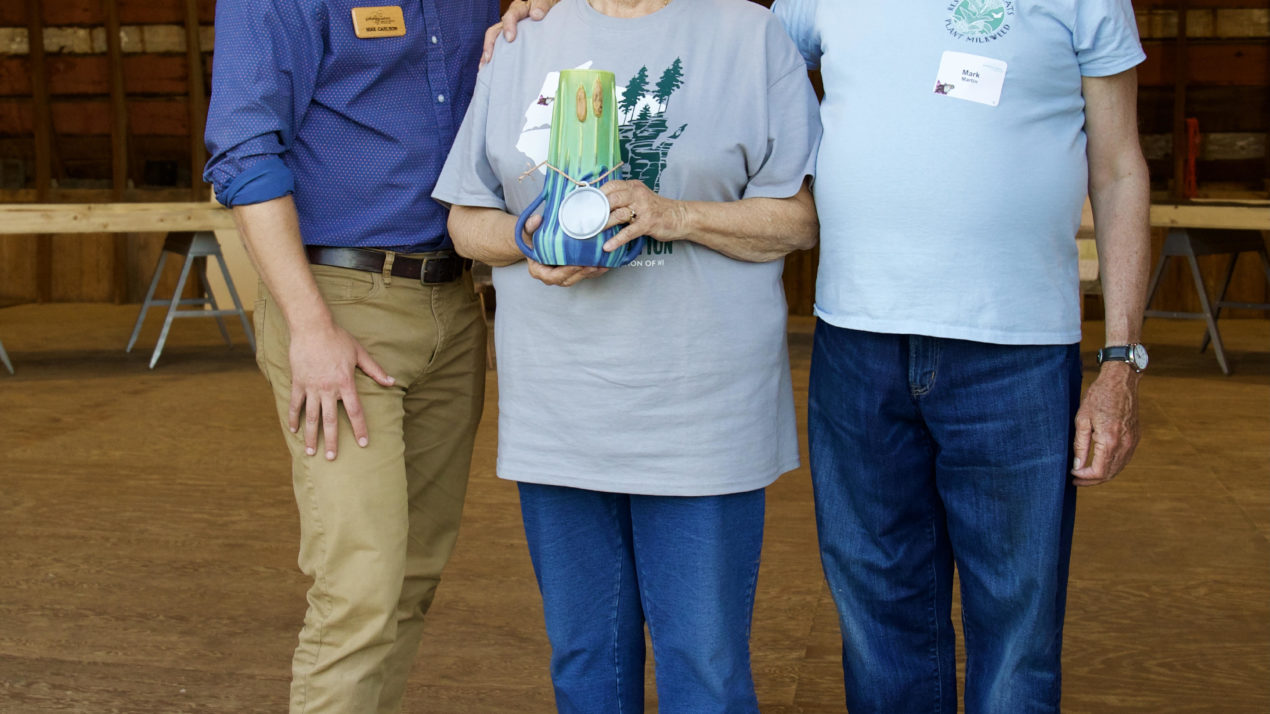 “Being recognized by Gathering Waters with the Lifetime Achievement Award is a great honor,” said Mark Martin with Susan Foote-Martin. “We are grateful to all the nominators, and everyone involved in hosting and attending the event. Conservation is so important for people and wildlife. We’re happy that we’ve been able to do our part to make a difference in Wisconsin.”

Together, the Martins have shown a lifelong devotion to protecting Wisconsin’s land and water—both personally and professionally. Susan and Mark made major advancements for conservation in their careers at the Wisconsin Department of Natural Resources (WDNR).

Susan began her tenure at WDNR as the education coordinator at the MacKenzie Environmental Education Center in Poynette. Later, she joined the WDNR’s Bureau of Endangered Resources, where she helped create the GreatWisconsin Birding and Nature Trail. Susan also designed and developed five WisconsinEndangered Species license plates. After retirement, she worked with the WDNR to ensure native cave bats afflicted with white-nose syndrome were added to the state’s “threatened” species list.

Mark started his journey as a wildlife technician for WDNR in 1971, taking on a range of roles in the department. He made a significant impact on the WDNR’s State Natural Areas Program while serving with the Bureau of Endangered Resources until his retirement in December 2011. During his 40-year career, Mark helped protect thousands of acres of high-quality habitat across Wisconsin.

Today, in addition to acting as resident managers of Madison Audubon’s Goose Pond Sanctuary, the Martins enjoy restoring wetlands, savannas, and prairies on and around their land in Columbia and Dane counties.

“The Martins’ tireless drive and passion to protect Wisconsin’s natural places has benefited the ecological health of our state,” said Mike Carlson. “Together, with their efforts with the Madison Audubon, the Martins have protected 2,700 acres across south-central Wisconsin—a significant accomplishment.”

“It’s hard to describe the magnitude of the Martins’ impact on Wisconsin,” said Matthew Reetz, Executive Director of Madison Audubon and Board Chair of Gathering Waters. “They live and breathe conservation. It is the very essence of who they are. Not only have they protected thousands of acres of land, but they also have inspired countless people to cherish and protect Wisconsin’s amazing natural resources.”

The Martins embody the meaning of Wisconsin’s Land Conservation Leadership awards,” said Carlson. “This couple has invested most of their lives to protecting Wisconsin’s land, water, wildlife, and way of life. It was an honor to present them with the Harold ‘Bud’ Jordahl Lifetime Achievement Award. Their efforts will make a difference for generations to come.”