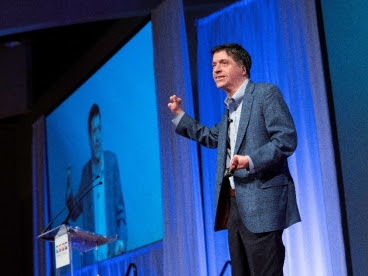 Changing the world can be as simple as having an optimistic, inspirational attitude. National best-selling author and motivational speaker John O’Leary impressed that message upon an audience at the Dairy Strong conference.

O’Leary, who survived a horrific accident in childhood, walked the attendees through his journey, challenging them to be positive in the face of adversity and to consider the power they have to improve the lives of others.

“Individually we can do very little, but together we can change the world,” he says.

When he was 9 years old, O’Leary was burned on 100 percent of his body while pouring gasoline on a fire. His prognosis was grim as he laid in a hospital bed for almost six months. His eyes were swollen shut and he couldn’t walk or talk. He said he took the opportunity to consider his life and listen to God.

“God said the best is still in front of me,” O’Leary says. “What would matter the most is what I chose to do next in life.”

O’Leary had a strong support system around him as he recovered and even began taking piano lessons at the insistence of his mother. Although he loathed the lessons at first because he had lost his fingers in the fire, he had a wonderful piano teacher who taught him much more than how to play an instrument.

“On our first day together, she said, ‘John, this is going to be really, really, really hard. It just is. Welcome to life, and we can do it together,’” he says. “What a gift it was to me that she said we could get through this together.”

Another life-changing gift for O’Leary was a lasting relationship that legendary St. Louis Cardinals baseball announcer Jack Buck developed with him soon after the accident. O’Leary will forever be grateful for Buck’s kindness.

Living with gratitude comes naturally to O’Leary. His parents raised him to be thankful for the smallest blessings. Even now, as his father struggles with Parkinson’s disease, the father-son duo often take time to discuss the good things in their lives.

“A few years ago, I asked dad to name three things he was thankful for,” O’Leary says. “Dad named the first three. And then he kept listing things. There were so many things he considered blessings despite his disease and what it had taken away from him.”

One item on his father’s blessings list was “to see, hear, learn, laugh and love every day.” O’Leary says he strives to build relationships with people who help him realize those goals. He also works to simply have gratitude for everything he has, a mission for everything he does and a vision for all that remains possible. These things also help inspire thousands of other people each year during O’Leary’s motivational speeches.

“We are here tonight for the relationships,” he said, as he spoke to the Dairy Strong audience. “What a gift to be in relationship with one another. Let’s remember that we’re not only called to see the broken, but also to find ways to fix the broken.”

O’Leary encouraged farmers in the room to innovate, lead well, and serve, connect, inspire and elevate others. While he played his mother’s favorite song on the piano on stage, he suggested audience members send a text to someone who inspires them.

“Our jobs as leaders are to bring the head together with the heart,” he says. “We also must remind others they are loved and worthy and ask ourselves what more can we do. We need to give the world examples to live up to.”