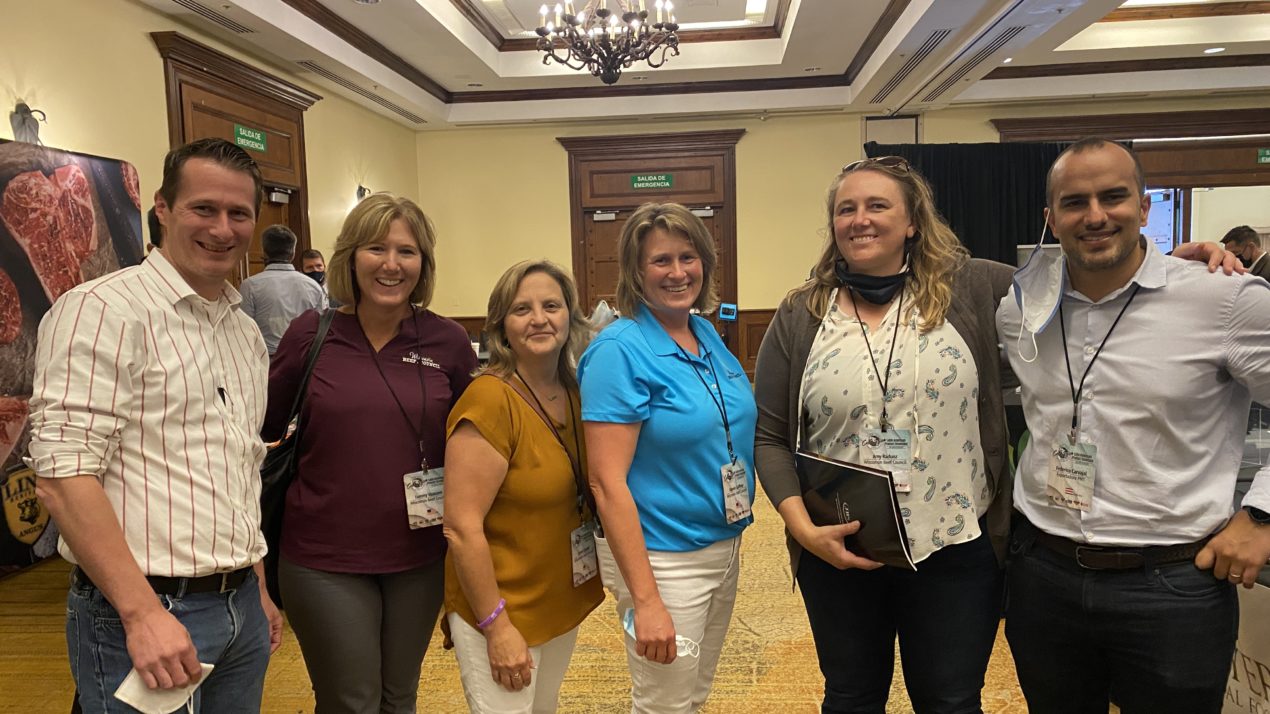 Leaders of the Wisconsin Beef Council (WBC) board and staff recently attended the Latin American Product Showcase (LAPS) in San Jose, Costa Rica. This was the 10th annual showcase event, which is hosted by the U.S. Meat Export Federation, a contractor to the Beef Checkoff. Valerie Gaffney, Barneveld; Rosie Lisowe, Chilton; Amy Radunz, Ellsworth; and Tammy Vaassen, Cuba City all participated in this two-day event that connects exporters of U.S. beef, pork and lamb with buyers from Central America, South America and the Caribbean.

The showcase featured a trade show where U.S. exporters and Latin American buyers could discuss the wide variety of beef cuts available for export, with the goal of increasing sales to the region. In addition, U.S. Meat Export Federation (USMEF) Chef German Navarrete gave a presentation on dry-aging and product handling, as well as a defrosting and cutting demonstration. Dr. Kim Stackhouse-Lawson of Colorado State University explained the sustainability practices of U.S. livestock producers.

Wisconsin participants met with importers to further discuss beef production practices, highlighting the diversity of beef produced in the state. They also connected with U.S. meat exporters and learned how both native and dairy-breed beef fit the varying needs of buyers. Finally, Wisconsin’s leaders toured two retail locations: a Walmart store and Auto Mercado, which was a higher-end grocery outlet in San Jose. Both stores featured imported U.S. beef cuts in the fresh and frozen meat cases.

The Wisconsin Beef Council has partnered with USMEF for more than seven years in efforts to grow exports to the Central American region. Through Wisconsin’s Beef Checkoff investments, this partnership allows USMEF staff in the region to create marketing and education programs for foodservice and retail establishments, as well as direct to consumers, to help them understand the quality and value of U.S. beef, and how the variety of cuts offered by our farmers can fit into their diets and budgets in the region.

In 2019, Wisconsin Beef Council hosted a group of Central American importers on a tour of the state, which included stops at beef and dairy farms, as well as the packing plants located in Green Bay.

“Our continued efforts in Central America are opening doors to grow exports of not only U.S. beef, but beef raised right here in Wisconsin. Having the opportunity to see our products in stores, meet with buyers and further network with other participants solidifies the value of investing our Beef Checkoff dollars into programs to increase exports,” said Valerie Gaffney. “We saw U.S. certified Angus and Hereford beef, as well as U.S. Ribeye and Strip Steaks that had the shape that makes us think they could have been from a Holstein raised right here in Wisconsin. Holsteins produce a different shaped ribeye than native beef breeds. It was exciting to see that range of products being featured.”

Central America is a promising, developing market for the U.S. with favorable tariff conditions afforded to the U.S. through the Central America and Dominican Republic Free Trade Agreement (CAFTADR). Current exports of U.S. beef to Central America are outpacing last year’s volume by 46 percent, through June of 2021.

Currently, 96% of the world’s population is outside the United States, and the growth of the global middle class is growing exponentially. Just in Asia, it is expected to grow more than 80% by 2030 – accounting for 66% of the global middle class. (By that time, the United States will account for just 7% of the global middle class.) In addition to this growing purchasing power, the beef cuts demanded in the international markets are typically different than the high demand cuts in the United States. As a result, the international markets boost demand, and prices, for a wide variety of cuts that are considered “underutilized” in the U.S., thus increasing carcass value. The additional value that is derived by exporting U.S. beef adds significant value to each head of fed cattle. From January through May of 2021, this additional value exceeded $361.29 per head of fed slaughter.