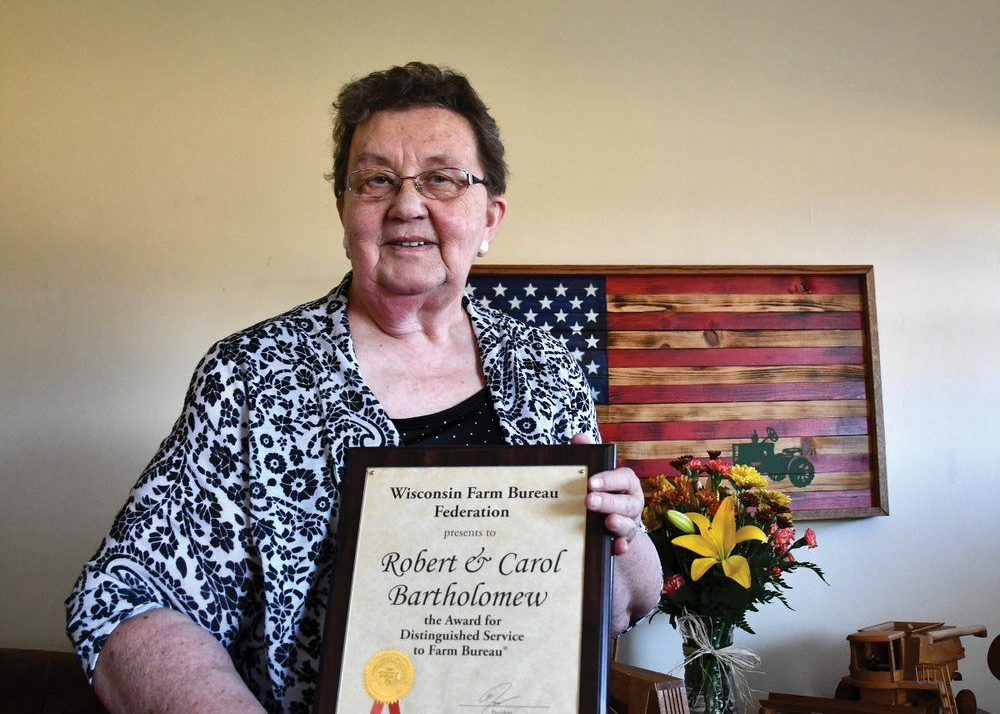 Carol Bartholomew was presented the ‘Distinguished Service to Farm Bureau’ award during the organization’s virtual 101st Annual Meeting on Dec. 4.

“For their commitment to making Farm Bureau a strong organization in Waukesha County and in Wisconsin, I am pleased to present our Distinguished Service to Farm Bureau Award to Bob and Carol,” said WFBF President Joe Bragger. “Although Bob passed away earlier this year, his legacy and the work that he did continues to thrive and help future generations of members.”

Bob and Carol were actively involved in Farm Bureau for many years. During his time as Waukesha County Farm Bureau president, Bob invited guest speakers to several board meetings and the county annual meeting. The tradition has continued and UW-Extension and county sheriff personnel; local, state and national legislators continue to attend meetings to keep Farm Bureau members informed. Bob also helped start the county Ag in the Classroom program and enjoyed visiting fourth-grade classrooms to teach students about agriculture. Bob and Carol also served as general leaders for their local 4-H club.

Bob and Carol attended AFBF Annual Conventions from 1987 to 2014. In addition, Bob served as a delegate to the WFBF Annual Meeting for many years. He served on many state committees and was involved in the first steps of use-value assessment with state legislators and other county Farm Bureau directors.

Carol served as chair of the county women’s committee for 18 years. She was the chair of the publicity and newsletter committee from 1987 to 2008. Carol also was the county historian and did a majority of the research for Waukesha County Farm Bureau’s 75th, 80th and 100th anniversaries.

Waukesha County Farm Bureau President Tom Oberhaus said, “When individuals think of Farm Bureau they think of Bob and Carol Bartholomew and the many contributions they made and continue to make. They embody the definition of ‘Farm Bureau Proud’ and are most deserving of this recognition.”