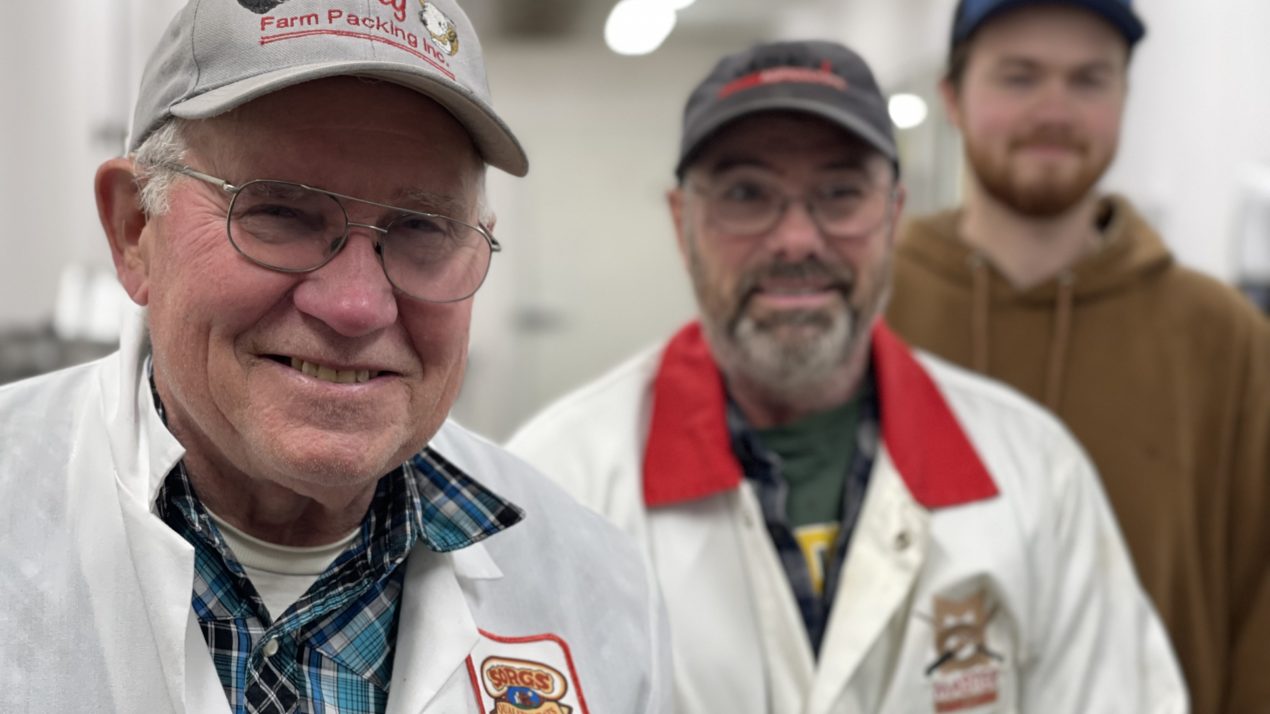 Sorg’s Quality Meat Market broke ground earlier this month to begin rebuilding and expanding their business, which was shocked by a silo collapse in October 2020.

At the time of the collapse, the family estimated that it could take six months to a year to rebuild. About one year later Sorg’s gained their final permits to rebuild and renew their family business.

Sorg’s Meat Market is a family business run by four generations, located on Highway 14 in Darien. It’s located on a family members’ crop and beef farm.

The first visible change on the property this fall and winter was the removal and placement of the original barn to a southern part of the property. The move will allow for a 4,000-square-foot expansion of the business. The move also reflected the perseverance of this farm family.

The meat processor and market founded in 1942 found its business disrupted when a cement stave silo, plump with newly harvested high moisture corn, fell onto the business freezers. Business was disrupted because processing equipment, freezers, cutting room facilities and contents of the freezer were not allowed to be touched until a thorough insurance assessment of the incident.

Steve Sorg, son of John Sorg, handles sausage processing for the market. He recalls at the time of the collapse the families first concern was, “how are we going to help the farmers?” The farming community rallied around the Sorg families by volunteering to help clean up and help get the business open after the collapse.

The family’s reaction to the destruction was like that of many farm families — they worked together and solved the problems facing them, one day at a time.

The collapse came at a time when the family business was already “feeling overloaded,” notes Steve. The COVID-19 pandemic had a big impact on their business. While demand for locally available beef went up, it often came all at once when consumers reacted to reports of meat shortages.

With an estimated $1 million dollars in damage to their business, the Sorg families also had to be resilient and adjust accordingly when their normal business cycle became unknown due to impacts from the pandemic.

Dianna didn’t grow up on a farm, yet became a farmer when she and Andy were married in 1991. When asked why the barn was moved, Dianna indicated that fire access needed to be created in case of an emergency in the rebuilt business. Then Dianna said, “if you take a barn down now-a-days, you’re not going to rebuild something of this style — you probably put up a pole barn due to the sheer costs involved.”

Dianna admits that her decision was also influenced by “sentimental feelings.” The barn also has a new metal roof installed only five years ago. Another logical reason for moving it instead of tearing it down. Yet like many generations of farm families, the buildings of their business — the barns do stir emotional reactions.

A small cooler that wasn’t touched by the collapse became the new cutting room for John A. Sorg (‘young John’) to keep the business operating. He says: “Before the silo collapsed I was planning to be a farmer, raising crops and beef on our farm — yet the disruptions of business during COVID-19 and then the silo collapse — I was drawn into more and more of the daily operation of the meat market. And now, I’ve become more interested in the science and craft of making products consumers want.”

In November 2021, a cement foundation was poured and then the barn was lowered and attached to it, signifying the start of the rebuild and renewal of Sorg’s Meat Market. Dianna was asked if she thought her son John has gained a role as the new cornerstone of the business — she smiled and said: “Yes he has.”

At 22 years old, Young John found his role in the family business and now uses time on the farm working in the fields as a moment of pause from his duties in the market.